Calling in the Highest Healing Vibrations 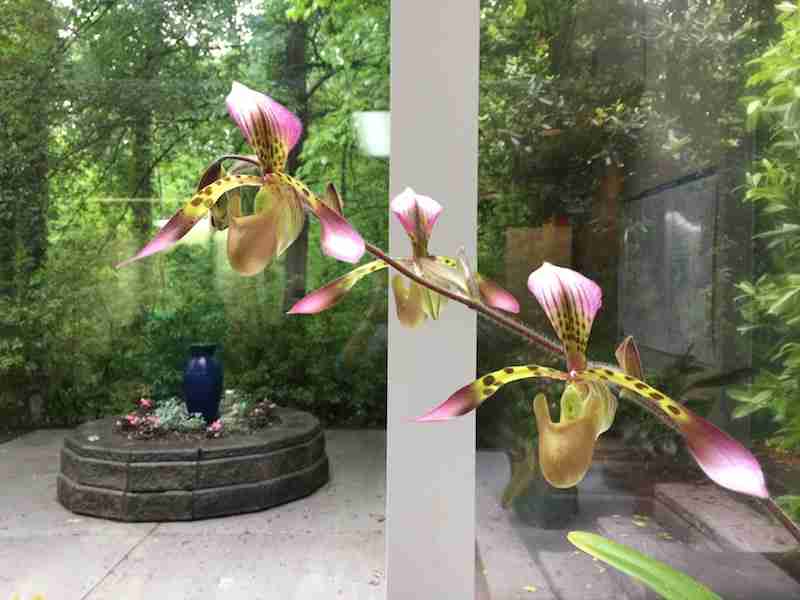 The good news of the past week is that Don Dennis, creator of Living Tree Orchid Essences, and his associate, Dr. Adrian Brito-Babapulle, a homeopath, pathologist and developer of Therapeutic Energy Kinesiology, approved the first version of my new flower essence Reverence from my orchid Paphiopedilum Haynaldianum.

Therapeutic Energy Kinesiology is a natural healing system that allows the practitioner to test the body for imbalances on an energetic, physical and emotional level and then correct them.

Many people who try to develop natural healing remedies from flowers are unable to keep their own shadow energies out of the essence.

This basically contaminates the essence, lowers the vibration and makes it unsuitable for use as an effective natural healing remedy.

“Adrian has done his testing, and the essence is good,” Don Dennis emailed me on Wednesday.

“But there is something further for you to do, to make it even better. I need to speak with you about this, rather than write about it. So is there a good time for me to call?

“But one good thing is that Adrian says it is NOT simply a ‘local’ essence for you and friends, but will be fine for general release (as you have already started doing). So that’s very good to know.  There’s just a little tweaking to do, which I’ll explain.”

When I spoke to Don, he explained to me that I had followed all his instructions for the essence-making process but that he had forgotten to explain one intangible but crucial element.

“Oh,” I said understandingly, “this is like when I explain to my yoga students how to do a pose and then look at them, thinking they have done it all wrong, only to reflect that I left out a crucial instruction!”

One of the special qualities of orchids as opposed to other flowers is that they can open the highest energy centers in the body – not just chakras 1 through 7 that are commonly known and studied.

In fact, some of the essences in Don’s own Living Tree Orchid Essences can open chakras above the head – chakras 8 through 26.

Orchids are the most evolved flowers on the face of the earth and therefore those of us who are crazy about flower essences inevitably become big fans of the power of orchid essences.

Don explained that he had forgotten to ask me to open my own upper chakras before making the essence and to ask the orchid to open its higher chakras and therefore evoke its highest healing potential.

So, on Friday afternoon I made version 2 of Paphiopedilum Haynaldianum.

Although I had been nervous before when I made the first version, I was even more so on beginning the second version.

I knew I wanted my orchid to sing like Luciano Pavoratti, not just like Joe the Plumber.

After finishing my clients for the week, I cleared the energy in my studio.

Then the UPS delivery man showed up.

I bought her down into the studio, told her to be quiet and resumed the process until Belle began barking.

I took Belle upstairs, gave her some food and then went back to my studio.

This time after clearing the energy in my space, I did the Source Connection process to connect the highest aspects of myself to God. You can read the directions of how to do this for FREE on my website at this link.

Then I placed the orchid in distilled water in a crystal Tiffany champagne bowl, asking the orchid to evoke its highest healing potential.

Although the Paphiopedilum Haynaldianum had been gorgeous when I made the first version, at this point the orchid had three open blooms and two buds, expressing an even more transcendent beauty than before.

Don said that Dr. Adrian really likes it when he makes essences with orchids that have three blooms as they express an even higher vibration.

Leaving the orchid undisturbed, I left my studio to be completely quiet.

I returned about five hours later and silently mixed the essence with brandy as a preservative.

When I meditated on the first batch, I discovered that Reverence opens the third eye chakra, crown chakra and minor chakra in the palm of your left hand, allowing you to receive the beauty of the world.

“How does batch 2 feel when you meditated on it?” Don asked me in an email.

Here is my report back to him:

“Tonight before going to bed I sat in meditation for 5 minutes after taking Reverence orchid essence.
Here is what happened:
Immediately it felt as if I was being pulled upwards to the light above me.
Then I felt a strong activation in the minor chakra in the palm of my left hand. This was similar to what I had felt in version 1, only way bigger.
Then I felt my third eye also being activated – once again I felt a bigger coursing of energy.
Then my third eye seemed to synchronize with the pulsing in the minor chakra of my left hand.
Then I felt as if light from above was pouring into my third eye.
Then I felt as if my third eye was being energetically restructured.
My third eye is still pulsing afterwards as I am writing this.
Overall it felt my third eye was being opened even more fully and deepened.
Once again, I got the sensation that the essence is blessing us with the ability to see the beauty and wonder of life even more deeply, so that we feel reverence for all of nature.”
A friend of mine sent me the Wikipedia definition of Reverence, with which I totally concur.
Although four friends who are kinesiologists had muscle tested the first version of Reverence to calibrate at over 600 on Dr. Hawkins’ Scale of Consciousness, the two I could connect with immediately after making version 2 now calibrate the new version at 700 or higher!
You can study levels of consciousness yourself by downloading the map for FREE on my website at this link.
Yesterday morning, I was up at 8 a.m. driving to the local Federal Express office to send Don Dennis the latest version of Reverence.
Fingers crossed that Don and Dr. Adrian like version 2 and find it hopefully even more powerful.