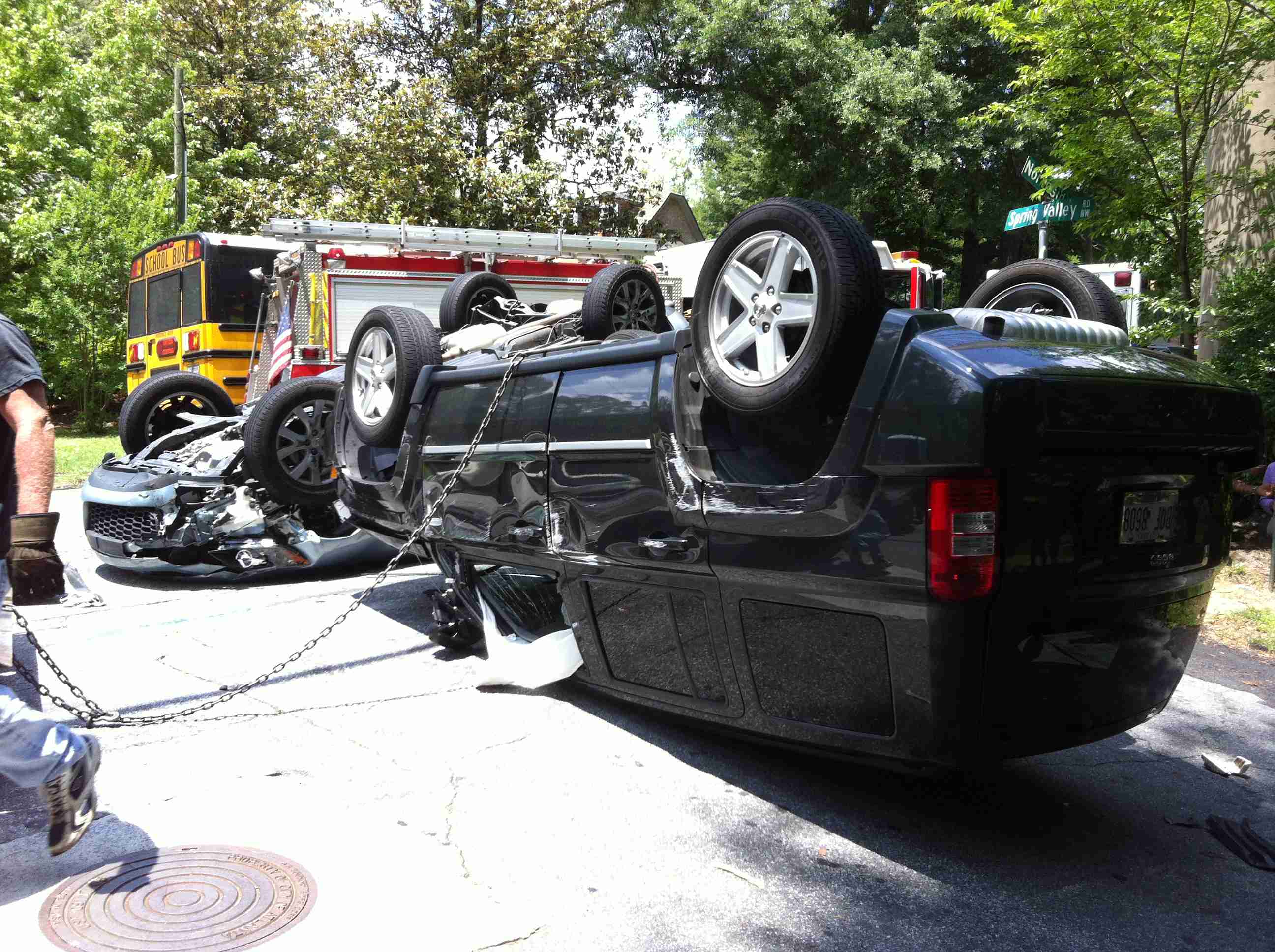 Dangerous Corner was the first play ever written by the English author J.B. Priestly.

It was one of the first plays I ever saw on stage in London.

The play begins with a chance remark that leads to disastrous consequences. It ends with the play returning to the very beginning, the chance remark not made and the unfortunate consequences completely avoided.

Yesterday there was a major wreck at the corner where I live and work.

I have seen so many collisions that completely totalled the cars involved that I have supplies on hand for when these things happen. I keep ice packs in my freezer so I can run out when I hear the unmistakeable sound of steel and glass smashing. And I have a bag of organic lollypops to give to the children, some of whom are sitting by the side of the road as their parents dissolve into tears.

My neighbor, Craig Lucie, is a reporter for Channel 2 Action News, WSBTV.com. He and I met at the corner yesterday. I had come home after the crash and police and ambulances were already on the scene. I handed out a lollypop to 9-year-old Aimee Odom who witnessed the crash, but there wasn’t much else I could do at that point.

This is what Craig wrote about the crash for WSBTV.com:

ATLANTA — Following a major accident on Northside Drive Tuesday afternoon, several neighbors are asking the city to remove the reversible lanes. Around 1 p.m., a driver said she was heading north on Northside Drive in the reversible lane when a car pulled in front of her. Witnesses said she clipped that car and went airborne, flying over another car and landing on another SUV causing that SUV to flip as well. “It made me cry. It was very scary to me,” said 9-year-old Aimee Odom, who was behind the cars when they flipped. One of the accident victims is Emory student Keri Scott. “All of sudden, something hit and hit me on the passenger side of the car and it turned my car sideways and it started to roll,” explained Scott. Neighbor Catherine Carrigan can’t count the number of accidents at the corner of Spring Valley Road and Northside Drive. “I think (reversible lanes) are extremely dangerous, and I’m surprised no one has been killed right here. I keep ice packs in my freezer for all the people who have accidents at my corner,” Carrigan said. Across the street from Catherine Carrigan is Kim Daugherty, where her neighbors call themselves “The Accident Rescue Team.” “I’ve heard or witnessed at least six accidents in the last six weeks,” said Daugherty. Residents said the reversible lanes are confusing, and several of the activation lane lights don’t work. “The lights have been burned out for many months,” Daugherty said. Compound that with speed, poor signage and a deadly blind spot near Collier Road, and residents said this crash could have been much worse. “It’s a shame it takes something like this to maybe save someone else’s life,” said Scott’s mother, Dr. Gail Scott. Channel 2’s Craig Lucie contacted the city and explained to them all of the issues that residents have with the lanes. They said they would send their traffic team out Wednesday, work with GDOT and have a response for Channel 2 Action News later in the day.

The play Dangerous Corner is about rethinking our actions so that we can avoid unfortunate consequences.

We can avoid car wrecks by paying attention to the road. Just a split second distraction can lead to deadly consequences. In the case of the corner at Spring Valley and Northside Drive, there have been so many wrecks that the city and state are now in a process of rethinking the entire intersection.

The irony is that just yesterday morning two of my clients were discussing the sign at that corner saying that people are not allowed to take a right turn.

You have to turn right at that corner to come to my home and my studio. My clients were wondering what to do.

Sometimes the police set up a trap half a block from my home in an effort to try to catch drivers who try to take a short cut at the corner in order to shave a few minutes off their drive to Piedmont Hospital.

Long ago I rethought the entire situation and rebuilt the entire back of my house so that I can park in the back and do not have to pull out onto Northside Drive.

My front door is now in the back of my home and not in the front. I rebuilt the parking area in the back and added new steps. When I come and go in my car, I take side streets where I can drive carefully at a slower and stress-free speed, thereby avoiding the people traveling 50 or 60 miles an hour on Northside Drive.

I chose to make my parking and driving easier. It was a conscious choice, just like I have chosen to make my entire life easier by working out of my house, teaching yoga and qi gong, doing what I love to do and working with people I really care about. I have chosen simplicity and happiness over complication. This is a mindset I have that I take into every situation. I ask myself, “How can I make this simpler, happier and better?”

When we as individuals continue to face unfortunate consequences, we can rethink the dangerous corners in our lives. How can we make things easier for ourselves?

My actual corner at Northside and Spring Valley is now a major issue for the city of Atlanta and the state of Georgia with the complications of a reversible middle lane and drivers who have just come off I-75 and who are still in a high speed mentality. The longer we ignore the facts, the more people continue to get injured.

Many years ago, I woke up in the middle of the night. Because I was unable to sleep, I went into meditation.

During my meditation that night, my guidance told me that there was a specific reason I had been blessed with my home.

Even at the time I bought my house, it was worth at least $150,000 less than other houses in the neighborhood. Today, I would not be able to afford to purchase in this area. I really love my home. I love my garden. I love my porch. I love the lot across the street that is owned by the city that is all trees. I love my view and I generally feel very safe here.

I was a little afraid when my guidance told me that there was a specific reason I had been blessed with this house. I was afraid it was going to be too big of a task.

I heard that I had been blessed with my home so that I could shift the vibration of all the people traveling past at very high speeds.

I was relieved it wasn’t a bigger task.

I did not understand this guidance at the time but now I do.

I like to live my life quietly and peacefully. I spend hours every week here practicing yoga, qi gong and meditation. It actually feels very quiet inside my home, especially with all the flowers surrounding me.