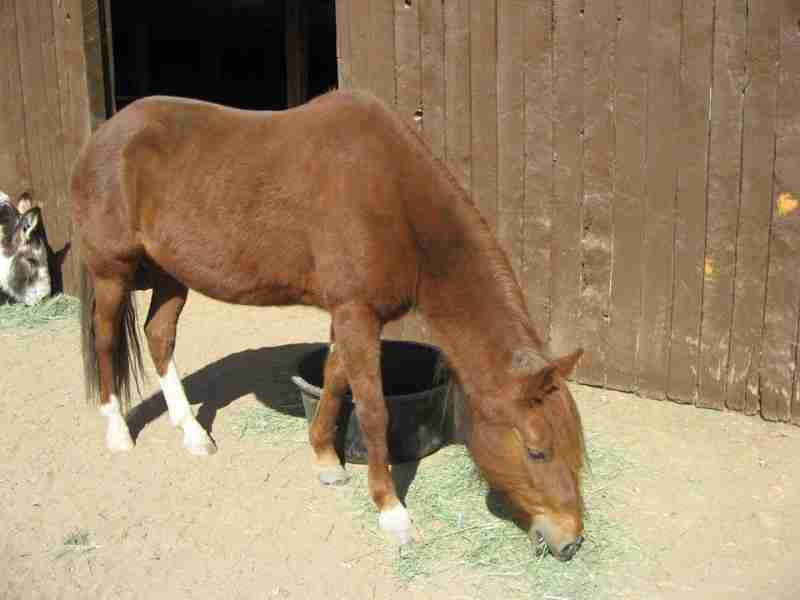 She tossed her luxuriant red mane in saucy defiance. She had loved and lost many times. She didn’t want to be hurt again. She caught him staring at her. She could guess that he had never seen the likes of her before.
He stood quietly. He didn’t find her self-importance particularly attractive. Cruel fate had delivered him from a farm to her as her only and forever companion. She wasn’t at all like the kindly, shy mare he had admired for weeks. But he had been taken far away from the fence that had stood between them, taken many miles to a new paddock. This horse tried to kick him—not once but repeatedly. Almost reluctantly, he demonstrated that a mammoth donkey has all the kicking power of a mare—and then some.

Callie was a gorgeous chestnut Peruvian Paso mare—the kind of horse that rides like a cradle when in gait—no hard bouncing, only rhythmic side-to-side motion.   From behind, she looked like a child who is in a dreadful hurry but has been scolded for running. Her hips waddled while her front hooves stroked to each side in turn, throwing mud on whomever might be riding nearby. She arched her neck. She didn’t quite have the conformation of a champion, but she had all the arrogance.
Her Peruvian Paso life partner had died suddenly a couple years earlier, a victim of his own energetic twisting in the dirt of the barn. His would-be replacements had failed miserably to earn her respect. She took vicious pleasure in cornering them so she could kick them again and again. When they left the ranch, she mourned pitifully.   She wasn’t really mean. She had never mistreated a rider. But Espiritu had trained her with bites to her rear. She had learned that dominance can be wicked fun. Now she stood, inconsolable, behind the barn, staring at the spot where he was buried. In spite of her poor social skills, she needed a companion.

Clifford was a horse-sized mammoth donkey with large brown spots. Because he had come from a pasture where he guarded goats, he no longer felt at home with normally sized donkeys or miniatures, either. So, when the opportunity of having a lovely home as an escort to a lonely mare arose, his caretakers agreed. He was a big hit with his new people. Hugging his massive neck was like hugging a roll of coarse wool carpet.
The relationship between Callie and Clifford unfolded gradually.   Once she had accepted the fact that she couldn’t bully him, they became fast friends. She tested his loyalty now and then, leaving him eating in the paddock while she pranced out of sight into the hills behind the barn. But she couldn’t bear his pitifully desperate brays when he suddenly couldn’t find her, so she returned to collect him.
Every day, the two friends came trotting in when the people called around 4:00. They were content to stand together in the paddock or the barn for the night. And then one early fall afternoon, the two friends didn’t come in when they heard the people calling. The people became alarmed. They split into a search party, hiking over the property.   At last Clifford appeared. He led them to a small clearing where Callie lay panting. She tried to rise. She took a couple steps and fell down again. Each attempt to rise ended the same way. Something was terribly wrong.

The people called the vet. They had been treating Callie with chaste tree berries for Cushings disease for years. Now, they were dreadfully afraid her time had run out.   The vet suggested that she might have ingested a bad weed that she could pass. He was in surgery and couldn’t come.
The people worried about how bad the weed might have been. They worried that she might follow the precedent of her brother, twisting her intestines into a knot that would kill her. They tried to make her rise—to no avail. They gave her anti-inflammatory medicine. They held her neck and stroked her. Finally, darkness fell.   The people sadly left her to her fate.   Clifford stood nearby, munching on evergreens.

In the morning, the people hurried to see what they didn’t want to see.   Had the bear or the mountain lion found her?
Callie was gone. So was Clifford. A new search began.
They found them together on the other side of the property. Clifford had spent the entire night making her rise and rise again when she fell. The people made sure both animals had food and water. Clifford was really hungry. Callie seemed to eat a little, too, and she drank. By afternoon, she shook herself off, stood up, and walked calmly back to the paddock with Clifford. The people cheered and wept with joy. It was a night of celebration. 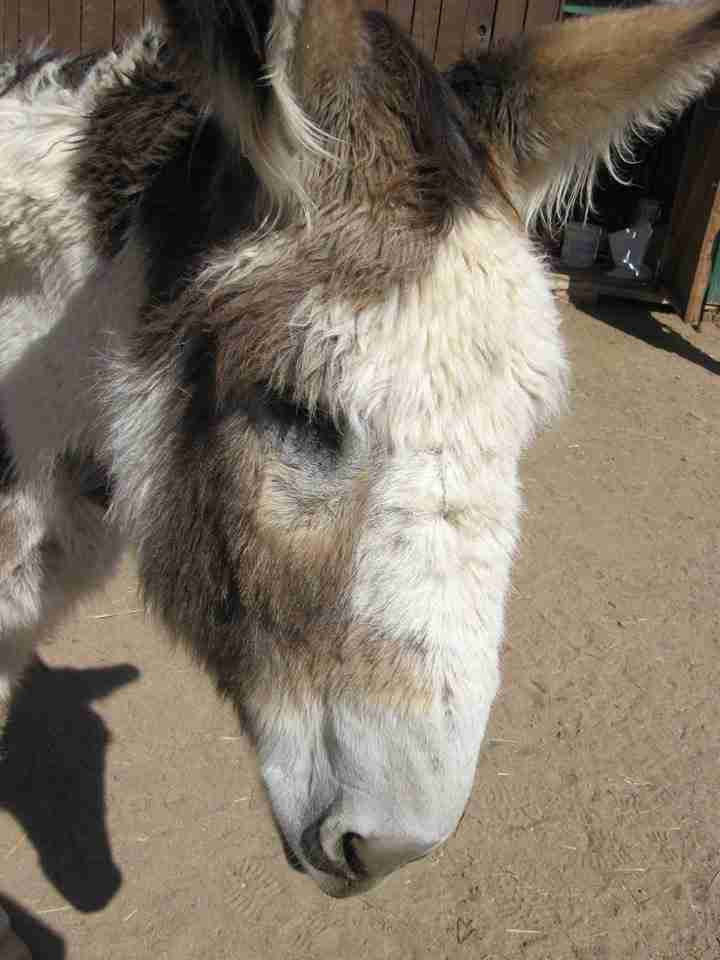 But in the morning, Callie was much worse. Her eyes had a haunted, distant look. The people rushed to call the vet again. He said to take her temperature. Maybe she had an infection. He could treat an infection. But she didn’t live to have her temperature taken. She died in the barn with Clifford standing over her.
Clifford experienced the stages of grief many say belong only to humans. At first, he pretended everything was still okay, even though the people were huddled beside their friend, closing her eyes and weeping onto her beautiful long mane. He ate his breakfast while the people dismantled part of the barn so the backhoe would be able to enter. When the barn was ready, the people took Clifford into a nearby pasture and tried to coax him away from the barn. He was distraught. He brayed his panic and sorrow. They were afraid he would hurt himself charging through the fence or attacking the backhoe. Finally, he stood silently in the distant pasture beside the women who wept onto his neck.
After Callie had been buried behind the barn, the people let Clifford return to the barn. He called to her. He looked for her, but he knew where she was. He sniffed the low mound that marked her grave. He brayed in pain.
He went into the barn. The people gave him Callie’s fly mask, the one she had worn only the day before. He picked it up and gently sniffed it—first one side, and then the other. Then he licked it—first one side and then the other. Finally, he took it in his mouth and shook it as hard as he could. He was angry that she could die and leave him behind.

In the days that followed, Clifford didn’t come in when he heard the afternoon call. The people had to find him and bring him in on a halter. He visited the grave daily. Sometimes he would accept affection, sometimes not. One day he charged the man—not hitting him but chasing his dogs away and threatening, really threatening. Why hadn’t the man saved his friend? Now and then, he brayed –one slow soulful bray.   Finally, the people had to accept that he needed equine comfort. They were too old to begin training another horse or a donkey that might live 30-50 years. They had to let the caretakers pick him up and take him away.

As Clifford climbed into the horse trailer to leave the ranch, he paused for the briefest moment, looking to the woman who had cried on his neck for so many hours.   They understood each other in that moment—the woman and the donkey. She hugged him. The man hugged him. They told him goodbye and thank you. Then Clifford climbed into the trailer, sniffing Callie’s fly mask the woman had placed in with him. As long as the fly mask was there, he seemed content to leave.
The last time the people heard about him, he was the hero of the smaller male donkeys at the shelter for his air of newfound confidence. But he still stood alone, perhaps thinking of the love he had tried so hard to save.