Do You Need To Be Repotted? 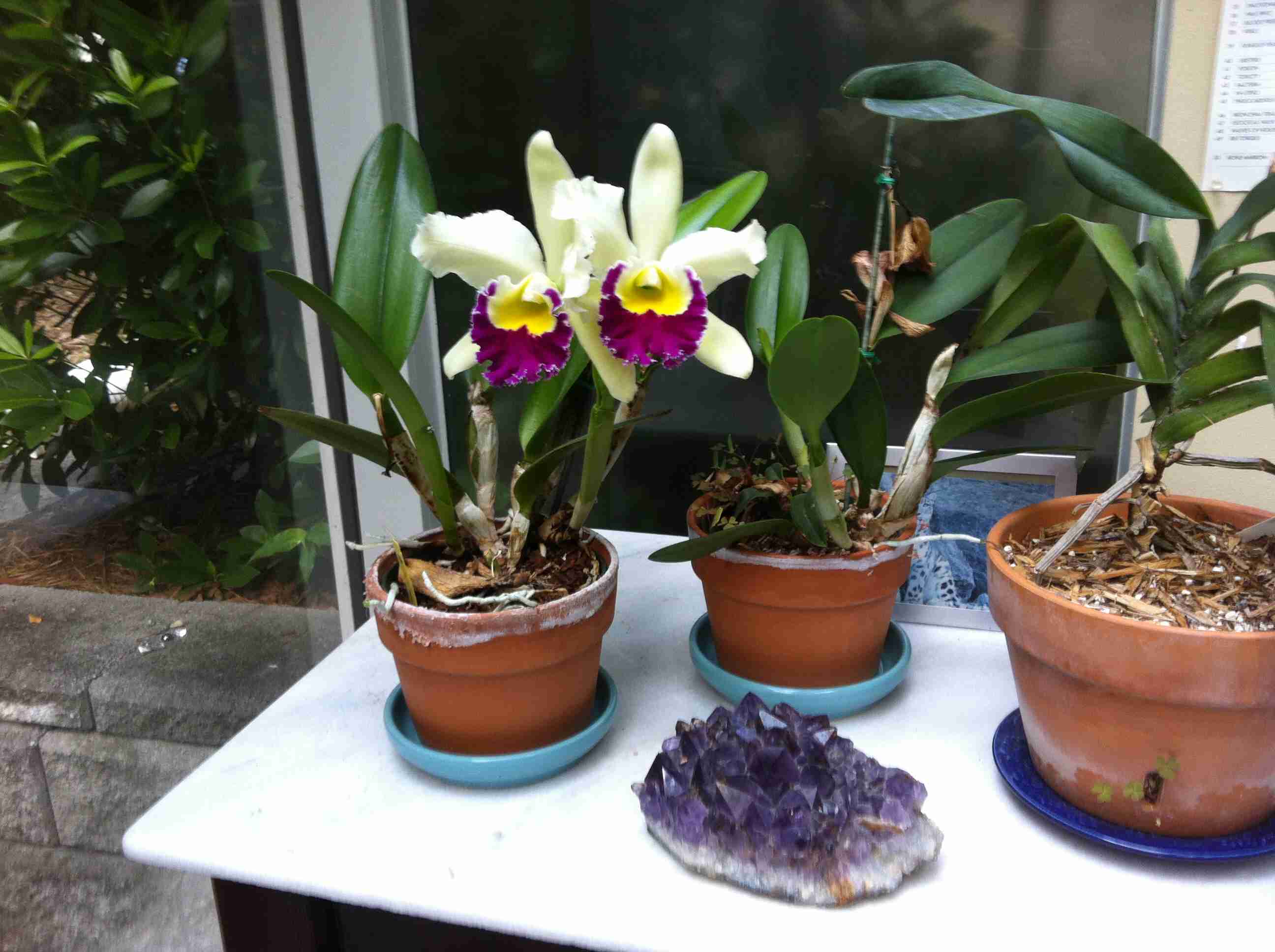 This afternoon, I faced one of my biggest fears: repotting my absolute favorite orchid, a charteuse cattelya.

Sharks at the beach. Public speaking. Getting swallowed by a giant whale while fishing. Tornados. Being in debt. Never finding THE ONE. And so on.

My recent giant fear has been about repotting my dear one.

I knew it had to be done. As any plant lover knows, when your flowers talk to you, you just have to listen!

The core issue for me was fear that I might make a mistake. What if I ruined him, losing him forever?

My charteuse cattelya in full bloom is so stunning it will stop you in its tracks. The aroma fills my studio for days. In bud, on its way to blooming, it does a little dance so graceful you could set it to a classical quartet. I rush down every morning just to see what’s happening next, it’s all so exciting.

So when he didn’t bloom as per usual this past December, I knew I had been ignoring the obvious signs. Even the roots had begun to grow towards the giant glass windows in my studio, sticking out like a long finger, “Help!”

In holistic alternative medicine, one of the many things that we learn is that as above, so below.

If your neck hurts, it’s not just your neck, it may be your stomach organ, your lack of contentment and total dissatisfaction with your life.

When you are afraid to repot your favorite orchid, you are ignoring the obvious signs it’s time to move on!

Years ago, when I was studying to become a healer, I read the sweetest story about a man who tried to raise tomato plants.

His desperate wish was to become a healer.  He thought he would start out with tomato plants, only to discover that alas he killed each one he brought into his garden.

Finally, in total frustration, he gave up on tomato plants and brought home a cactus. He figured he couldn’t kill it, so why not start there?

Each day, as he came home from work, he noticed the subtle changes in his cactus plant.

As he paid close attention and responded, the cactus flourished.

The essence of gardening, in two words, is paying attention.

The essence of alternative holistic healing, in two words, is paying attention.

As we listen to our orchids, we can respond and they give us flowers beyond our wildest dreams.

As we tune in to our body, mind and spirit, we become healthier, more vibrant and happier, responding appropriately in each moment to what is needed at the time.

Sometimes we just KNOW it’s time to break up, sell the farm, get a new job, find a new career, stop hanging out at the bar, give up smoking, take up that exercise program we have been talking about.

Just this past week, I had a session with a client who admitted she had done a “naughty thing.”

Completely frustrated with her boss, she had poured water into her boss’s boots. No surprise, her boss then went on a person-to-person manhunt to discover the perpetrator.

The axe appeared ready to fall on my client, coincidentally just two weeks after her husband passed away.

You know you are being tested when everything happens all at once!

We had a session and I said to her, “Your husband and your job have kept you in a mild state of depression for many years.”

She had been separated from her husband for five year at the time of his death but remained connected, even though the relationship brought her no joy and her child had long since grown up and grown out.

About two years ago, her boss cut her pay significantly, but she did not read the tea leaves and stayed on in various states of misery and inner fury.

I always say God only has to hit us over the head when we aren’t paying attention!

So back to me.

I was so petrified of making a mistake while repotting my favorite orchid, I had been searching for an orchid expert to assist me with the task.

Finally, however, today I manned up. I bought some orchid potting mix and watched a video on Youtube. “I’m a college graduate” is one of my favorite inner pep talks.

“This can’t be that hard,” I thought.

At last, I brought my chartreuse cattelya and a deep red wine cattelya into my kitchen, put on an apron, opened my compost bucket and began the messy task.

I cut off the dead roots, cleaned out the healthy specimen and repotted my charteuse orchid.

As soon as it was all over and I returned my chartreuse baby to her accustomed spot by the window I felt a sense of inner glory.

The red wine cattelya proved even easier. I was able to divide that one and make a total of three potted orchids.

What is healing? Healing happens when we pay attention, responding to the subtle signals we receive.

When we listen to our mind, body and spirit, we know when it’s time to repot ourselves, moving on from that which no longer serves us.