God Has Filled My Heart with Dog Babies 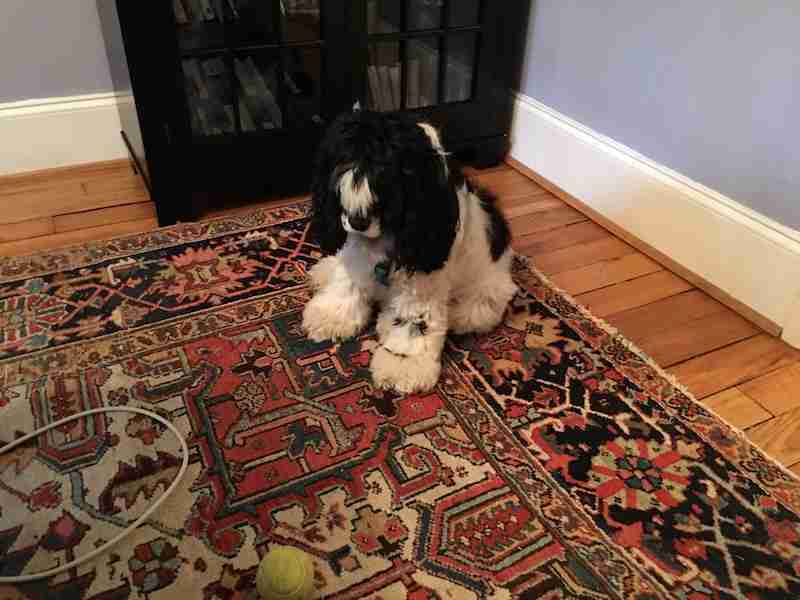 This is a very personal article about the phenomenon of childlessness, the pain of domestic violence, the blessing of dog babies and my work as a medical intuitive healer.

This morning I woke up and I saw inside my heart two cocker spaniels: my brown and white dog Belle who passed away last July and my black and white Dixie who I dropped off last night at a friend’s house.

They were playing intently together with a yellow tennis ball and watching them inside my heart made me feel complete with happiness.

These are my two little girls – Belle and Dixie.

Like many women, when I was younger, I had a deep drive to have human babies.

This overwhelming soul longing caused me to face up to my own personal health and what was going on at the time in my first marriage.

I was 30 years old. I had been on lithium and/or antidepressants since I was 17.

I wanted so badly to have a child that following the advice of my psychiatrist I got off all the psychiatric medication.

I remember at the time leaving my house to go to work one beautiful sunny morning. Stepping outside, I heard the birds sing, saw the trees and blooming and found myself thinking, “I want to kill myself.”

My husband and I had been having a violent relationship. I remember waking up another morning with my head ringing because he had hit me so hard the night before I could still feel the blow behind my right ear.

I’m a can-do type of person and I tend to face up to my personal challenges. I had been attending a YWCA support group for battered women and somehow I had convinced my husband to go to the corresponding group for men who hit people.

I’m not a stupid person but I would attend the YWCA meetings week after week to learn the Wheel of Power and Control and for the life of me I would have trouble recalling all the ways that people could be controlled and abused (I still to this day have to look it up):

The support groups would always start by someone drawing a big wheel on a flip chart and we the women would have to sit there and list out all the methods of domestic violence.

Women from the fancy houses in Belle Meade with maids and silver, women from the projects and me, none of us could remember it all and we would have to be prompted.

Abuse is a very hard thing to face.

On other evenings of the week when I wasn’t attending my meetings I volunteered at a domestic violence shelter.

I would babysit the children of ladies at the shelter so that they too could attend other meetings.

While taking care of these little children, babies and toddlers, I began to see for myself just how profoundly other family members could be affected by the pattern of domestic violence.

Even if they were too young to speak to tell me what exactly had happened, I could feel the pain they had suffered.

Witnessing this first hand, I resolved I could not bring a child into my marriage.

I faced up to the fact that I could not change my relationship. I could only free myself by leaving it.

During this time I kept a journal. I remember at one point making a list of all the very bad things that had happened and thinking, “This is ridiculous.”

The list went on and on, page after page.

“I actually want to be happy.”

I had no clue at that point in my life how I was going to go about being happy, but I decided right then and there at age 31 that I was going to become a happy person.

It was probably the most pivotal turning point in my life.

Literally every decision in my life subsequent to this choice has been filtered through the lens of this wisdom.

I left that marriage, remembered that the only thing I really wanted to do with my life up to that point was to write plays and moved back home to Savannah to begin my writing career.

I ended up writing 12 plays and had three productions Off Off Broadway in New York and one in Atlanta.

When I remarried and moved to Atlanta I wrote my first book and started a totally new career in natural healing.

The first 10 years of my work as a healer I studied natural healing for the brain, beginning with Brain Gym, which led me to study with my mentor in healing, Sue Maes of London, Ontario, Canada.

I had been able to get myself off of lithium and antidepressants at age 34 – well before I started studying with Sue – but Sue was the healer I credit with actually healing my brain and then teaching me how to offer the same blessings for others.

Anybody who has ever worked with me for any period of time has heard me praise Sue from the depths of my heart.

Sue said to me once, “I have worked with people who have been hit by cars, who have had severe alcoholism and head injuries and I have never worked with anybody as sick as you were. You do not give up.”

Thanks to Sue, I first got well myself in every sense of the word and while receiving healing I also studied my heart out and developed the capacity to heal others at great depths.

When I first started going up to London, Ontario, to study with Sue, I was so sick I had to lie down at lunchtime for one hour to rest while everybody else went out to lunch.

During this time Sue asked me if I still wanted to get pregnant.

My entire endocrine system was totally shut down and I had gone through several years without a period.

Although doctors had examined me, there was no physical reason the medical profession could find why I wasn’t having a period.

Sue helped me restore balance to my female system, but after the abuse I had suffered I realized I did not want to bring a child of my own into the world.

I could recall my father, a successful medical doctor, kicking me one evening until I urinated all over myself.

My earliest memory of my life was of my father beating my mother with a leather belt. She was lying on the floor covering me with her body so that I did not get hit. I can still recall the flash of the metal belt buckle.

I remember thinking, “If I have a child and my father treats any child of mine the way he treated me I will just fxxxxxx kill him.”

Not wanting to kill anybody and recognizing that I can not change my father, I gave up on the idea of having my own babies.

I poured my soul longing to nurture others into my clients.

As one of my clients – a woman at least 25 years older than me – once said to me, “We are your children, Catherine.”

As time passed, I worked with many other women to empower them to overcome the challenges of infertility.

I would do medical intuitive readings to identify their blocks – physical, energetic, emotional, mental and spiritual – and many children now laugh and play on earth as a result of the work I did together with their mothers.

One woman would tell a friend or relative and soon enough my practice grew as I worked patiently and thoroughly to root out all the causes of infertility and childlessness.

During this time I had not just one but two orange cats until finally a friend telling me about a cocker spaniel named Belle at the Atlanta Pet Rescue.

I hadn’t had a dog since growing up and Belle became my first dog baby. 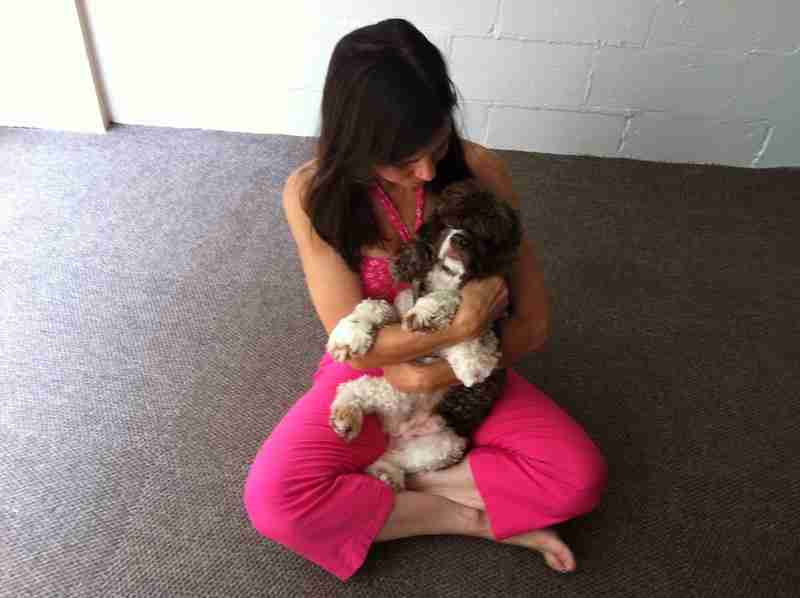 When Belle passed away in July 2016 I knew I just wasn’t going to be O.K. until I got another dog. 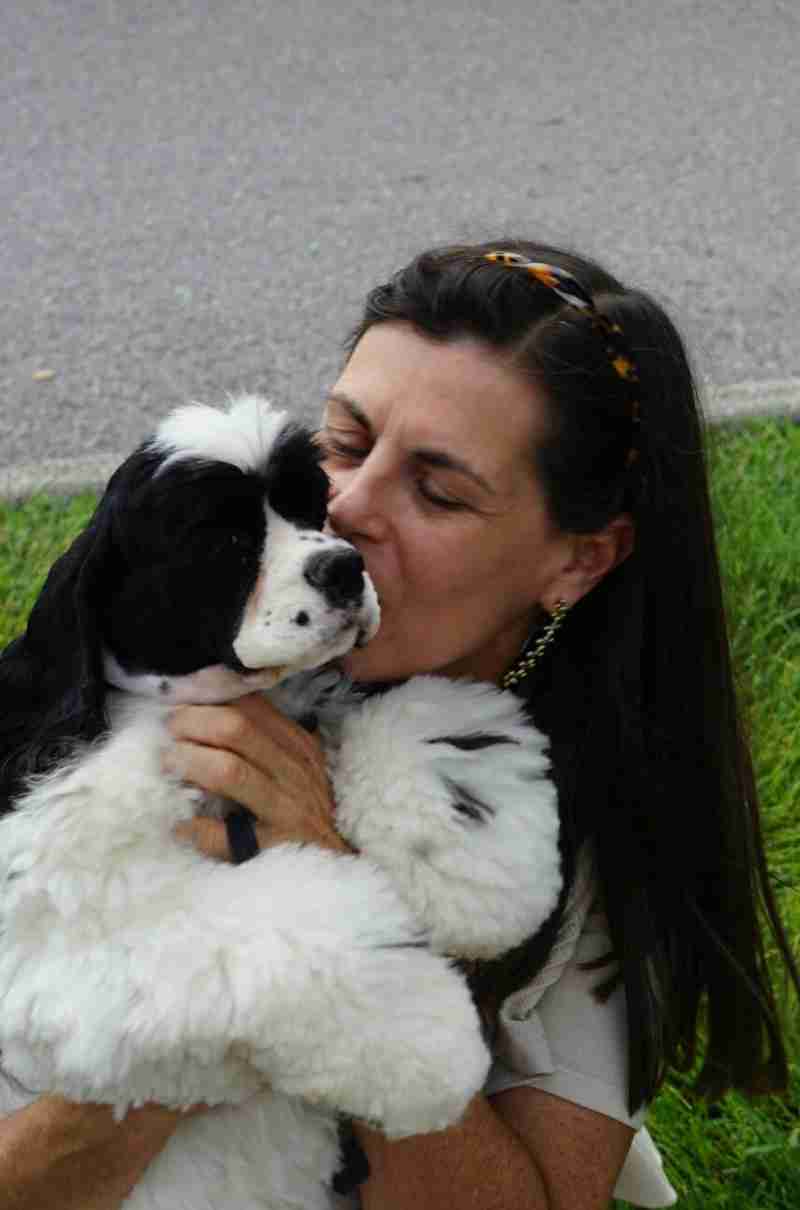 The day I adopted Dixie. I can still see the pain in my face from losing Belle.

Even though I have not had human babies, Belle and Dixie have filled my heart in a way no human ever has.

There is no such thing as a vacuum.

I’m so thankful for Belle and for Dixie and for all the blessings I have received from my knowledge and practice of natural healing.