My Favorite Story About Healing 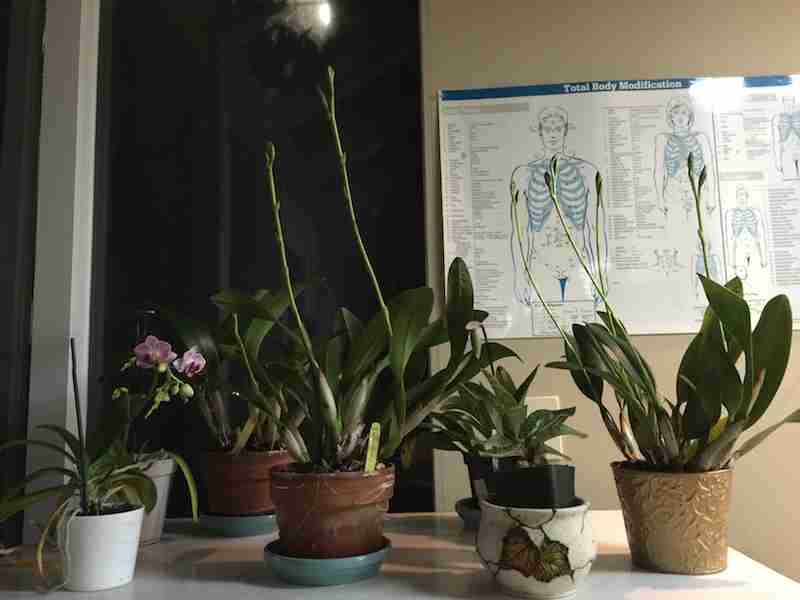 When I returned from Thanksgiving vacation on Monday, I went down to my studio and discovered that my favorite lady slipper orchid,  or paphiopedilum, had formed a bud! I have been waiting and watching for nearly year. Now it’s happening!!!

Meanwhile, a miniature phalaenopsis had opened two blossoms while two of my cattleyas – sisters who had been one  orchid I had the courage to divide earlier this year – had grown five tall spikes each.

Each day, I marvel at every small change – a petal lifting, a spike turning. You would be amazed to notice how gracefully orchids move if you only paid attention.

Years ago, when I used to teach classes in kinesiology, I would read my favorite story about healing.

A man decided he wanted to become a great healer.

Then one day at a market he found a cactus plant. Figuring that it would be difficult to kill a cactus, he brought it home, placed it in his front hallway and admired it daily.

The cactus flourished under his careful attention.

This is the punchline. This is the meaning: Loving careful attention changes everything!

People always ask me how I grow such gorgeous orchids: Loving careful attention.

People always ask me how I get my orchids to rebloom so many times: Loving careful attention.

Even quantum physicists will tell you that the mere act of observation alters literally every process.

The observer effect is a well-known scientific phenomenon that states that the mere act of observation will affect the outcome of any process. The commonplace example is taking tire pressure. You can’t measure tire pressure without letting out some of the air, thereby changing the tire pressure.

Werner Heisenberg, a German theoretical physicist, developed what is known as the Heisenberg Uncertainty Principle, which states that the more precisely you measure the position of a particle in space, the less precisely you are able to determine its momentum, and vice versa.

All this can be altered by your intention. Quantum physicists refer to this as the collapse of the wave function, whereby our intentions literally affect the physical world.

Healing is simply taking advantage of the Heisenberg principle.

We are always affecting our environment all the time, whether we recognize it or pay attention or not.

Your glance can bring a smile or a shudder.

Your mere presence can make someone’s day or ruin it.

Your energy affects every thing and everyone around you.

Not just my orchids, but my entire garden prospers under my careful observation.

Just yesterday, I walked along the paths in my front garden and gave a wistful thought to my Blackeyed Susans who have all gone to seed, wondering how they will manifest next year, as every fall they come back more lush than the year before.

I could see it in my mind’s eye  – now and then – a garden in a constant process of evolution.

Healing happens when we bring our love and attention to the world around us, giving thanks for all we perceive, celebrating every small step of the process.