The Owl Who Made My Day 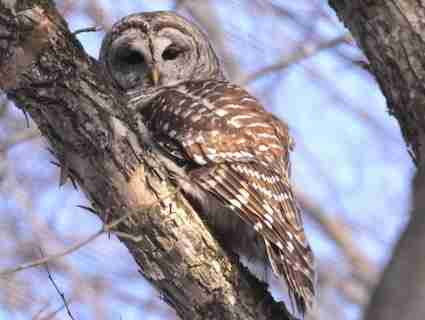 Tuesday afternoon I was sitting in my office taking notes on my healing work while speaking over the telephone with a client in Santa Monica, California.

To the left, I could see out the window into my front garden. Behind me stood giant double paned windows overlooking the forest across the street, acres of undeveloped land owned by the city of Atlanta. To the right of me shined an additional window with a view of my back garden, including my blue jar fountain, my vegetable garden and two bird feeders.

All of a sudden, as I was looking out the window to my left, I saw a large brown bird fly by. He was so big I though at first he must be a hawk. I turned behind me and saw him land in the tree overlooking my desk.

I could not have been more excited than if the pope had paid me a visit!

Interrupting my client, I explained the blessed visitation: a large adult owl, probably a barred owl based on his round head, spotted plumage and deep black eyes. We were staring at each other literally eye to eye.

His gaze was so fierce it seemed we were waiting to see who would blink first.

I doubted it would be him. He did not seem intimidated in the least, ruling my garden as he did, unconcerned with the songbirds on other branches near by.

I can’t tell you how exciting this is to me.

In the summer of 2009, I was out walking my dog Belle when I came upon a great horned owl.

He was sitting on a large branch overlooking Spring Valley Road behind my home.

It was a Sunday morning, so I had the time to stand there staring at him for about five minutes. After a bit, I felt that maybe I should get a move on, as if I had something more productive to do, but as soon as I resumed my walk with Belle and the owl flew off, I immediately regretted disconnecting, so much so that I spent the rest of the day walking round and around looking for him.

Finally, at the end of the day, I saw him again, this time from a greater distance. He was flapping his great wings and landing in a far away tree.

At that time, I felt the owl was ushering in something important, even though I was not sure what it was.

As a student of natural medicine and nature itself, I am always looking carefully when I am out in my garden or taking one of my long walks in the neighborhood. I feel that nature is always communicating with us – if we only have the wisdom to listen.

Within a week of my unanticipated meeting with the great horned owl, I received a call from my new friend Don Dennis, founder of Living Tree Orchid Essences. Don invited me to be his guest to visit the Isle of Gigha in Scotland and to meditate with him and other healers from around the world about the therapeutic qualities of his orchid remedies.

It turned out when I arrived at Gigha that Don’s power animal is an owl! I discovered a stuffed toy owl in his office, and when I asked Don about it, he explained his long-standing relationship with the owl kingdom.

It seemed the owl I met on my walk that summer had indeed given me advance warning of something very special.

When I saw the owl today, I could not make out exactly what he was signifying. The only thing I received was that I am in the midst of experiencing a major energy shift. What that shift is about, I couldn’t say.

The owl sat next to me for the remainder of my client session – probably another 15 minutes – as if he was waiting for me to be done.

As soon as I was complete with my client, I ran upstairs to the top floor so I could view the barred owl again from a higher perspective.

As soon as I looked out my third-floor window, he spied me immediately and once again we stared at each other eye to eye.

It was a fierce gaze, completely free of any fear. It felt as though he was sizing up my soul, taking it all in with silent calculation.

After about a minute, he flew off into the forest across the street. He was gone.

My primary power animals are two snow leopards – a mother and a baby – a hawk and a hummingbird. In the process of writing my last book, What Is Healing? Awaken Your Intuitive Power for Health and Happiness, I also worked with wolf energy.

When we form a relationship with our power animals, we can call on the power potential of each animal in any situation.

Although snow leopards, hawks and hummingbirds have been my regular companions for many years, I still search the forests near my home for owls every time I go for my walks.

In shamanism, owls are symbolic of the ability to see what is hidden and to hear beyond what is being said, uncovering all that is hidden with the force of their intuitive wisdom.

This photo of a beautiful barred owl comes courtesy of the Cornell Lab of Ornithology.